PLYMOUTH, Connecticut, U.S.A. — Tim Temples has just finished high school. He’s young, popular, athletic, and has all the girls chasing after him. At the start of his summer vacation he’s at the top of his game, but now he has college looming only a few months away. He’s starting to have visions of his local fame vanishing into nothing once he leaves his hometown of Mattoon for the University of Illinois in Champaign. On top of that he must also contend with the older female co-worker, Helena, that he has started seeing, whom he must also face the possibility of leaving behind when he departs for college — unless, of course, he decides tonot go to college at all. 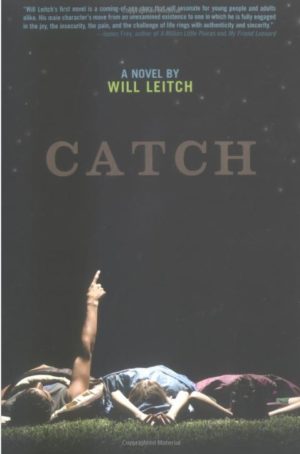 Will Leitch, author of Life As A Loser, a book that contained a series of essays about the adventures and failings of his own life, has chosen a fictitious platform to discuss the adolescent exploits of Tim Temples. With the novel Catch, Leitch explores Tim’s largely psychological challenges of maturing, letting go, and understanding a great deal more about himself. At the first the reader might be taken back by having a main character who seems to lead such a perfect life complain about the uncertainties of his future. (Forget sneaking alcohol into a party – the 18-year-old Tim gets as much free beer as he wants when he goes to the local bar.) That sentiment is diminished, however, once he meets Helena.
Twenty-three-year-old Helena adds a million other complications to Tim’s post-high school plans. Will their relationship last after the summer? Is he really falling in love with her? Does she feel the same way about him? The love affair levels Tim from the resident all-star to the teenager who has to deal with the same issues that all other teenagers encounter at some point. The fluctuations in Tim’s thoughts and emotions create a confused character that anyone can identify with.
The style and wit of Leitch’s writing makes the otherwise cliché coming-of-age story an exceptional read. With deft prose he weaves details of Tim’s overweight co-workers, intoxicated bar flies, high school pals (“the Horsemen,” as they’re called), and other local personalities. Infused with the text are numerous sports analogies – Tim happens to be a baseball player – that illuminate dramatic situations with unusual depth.
The humor also keeps everything lively. At one point Tim describes a proposed plan by saying, “This is a bad idea. This is a terrible idea. This is the guy who told Noah, ‘Hey, no thanks, man, it’s a beautiful day for a swim.’” Even the standard profound dream sequence is punctuated with, “And then Godzilla comes and sets a cornfield on fire. I don’t know what that part was about.”
It’s Leitch’s personal touch to the story, much of it undoubtedly inspired by his own experiences growing up in the small Illinois town of Mattoon, that makes this typical teen story a superb book.