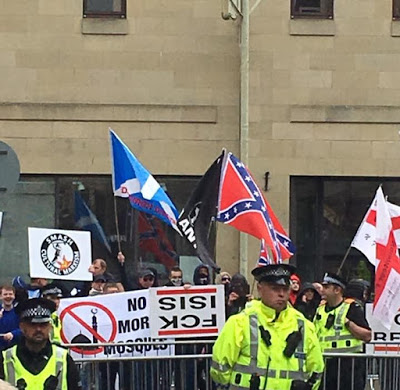 Perth police stand in front of barricades Sunday while supporters of the Scottish Defence League behind them carried flags, including a Confederate flag, in protest of a new mosque in town. (Katy Lingwood/YJI)
PERTH, Scotland – In quiet Perth – a small city not used to being the center of attention –anti-fascist protesters used bagpipes to drown out a far-right group rallying in opposition to a new mosque in town.

Sam Baillie, a 21-year-old from Kirkcaldy who said he attended the event out of curiosity after reading about it on Facebook, said the anti-fascist protesters far outnumbered the anti-Islamic group.
Rather than inciting violence, organizers of the anti-fascist groups encouraged participants to bring musical instruments to drown out the anti-Islamic cries from the SDL.
Some did their best to drown out the Scottish Defence League with bagpipes. Others carried signs saying, “NAE Nazis,” using the Scottish word for “no.” 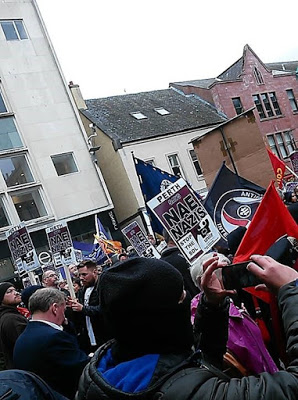 Despite pleas for a peaceful protest, not everyone limited themselves to bagpipes and signs.

Asked whether the counter demonstration had any violence, Baillie said, “For the most part, no. The police did a fantastic job and any violence was stopped immediately.”
But Baillie added, “That being said, I did give a man in a balaclava an anti-fascism sign, and later on, I saw him punch a guy outside Kwik Fit but this was stopped basically the second it started. Otherwise, nope.
Some people were throwing eggs if that counts, but again that was stopped straight away.”
The anti-Islamic group arrived in Perth from across the country, to protest the building of a new mosque.
After the Scottish Defence League confirmed they were to protest in the center of Perth, locals started a new group, Perth Against Racism. That group’s Facebook page created the counter-protest event “Stand Up Against Racism and Fascism in Perth” which gave details of where, and when the counter-protests would occur.
According to a Scottish Defence League poster, they held the protest over the number of parking spaces the new mosque will have.
But according to a statement by Perth Against Racism on its Facebook page, there was more to it.
“They claimed their demonstration was about concerns over parking at the site of the new Mosque – yet they came with flags emblazoned with Nazi insignia and flags of the confederacy, and signs emblazoned with slogans
against refugees,” the statement says. “Their agenda was clear. Racism. Bigotry.” 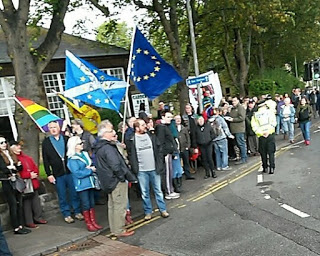 Counter protesters gathered on a corner in Perth with rainbow and Scottish flags. (Sam Bailie, used with permission)

In an unsigned response to a reporter’s message to the Scottish Defence League 2 Facebook page, a moderator called the rally “very successful.”

The response was to stand as a statement from the Scottish Defence League, the message said. The statement also said that their Facebook page includes the numeral 2 because Facebook deleted the first one, citing a breach of community standards because of a “ban the burka” photo.
Baillie said a lot of the Scottish Defence League supporters “got excited and hyped up over getting insulted and shouted at” by counter protesters.
“By the way some of them behaved, they enjoyed the hate,” Baillie said.
Beth Criado-Band is a Reporter and Senior Videographer for Youth Journalism International.


Editor’s note: The story has been corrected to reflect that Baillie was an observer, not a counter-protester.
Take a look at video footage from the protest, provided by Sam Bailie:

***
You can help young people bring news from their part of the world with a tax-deductible contribution to this nonprofit. Thank you for making a difference!
HelpYJI.org