The North Korean countryside in the winter of 2019. (Selvaganeshamoorthi Balakrishnan/YJI)

Pyongyang, NORTH KOREA – As the train neared Pyongyang, a wall of skyscrapers glimmering in the far distant night sky greeted me.

In front of me stood a modern city, one complete with skyscrapers, wide boulevards and a decent public transportation system.

It was the antithesis of what I’d thought about Pyongyang. I’d envisioned a decrepit city where time stood still. 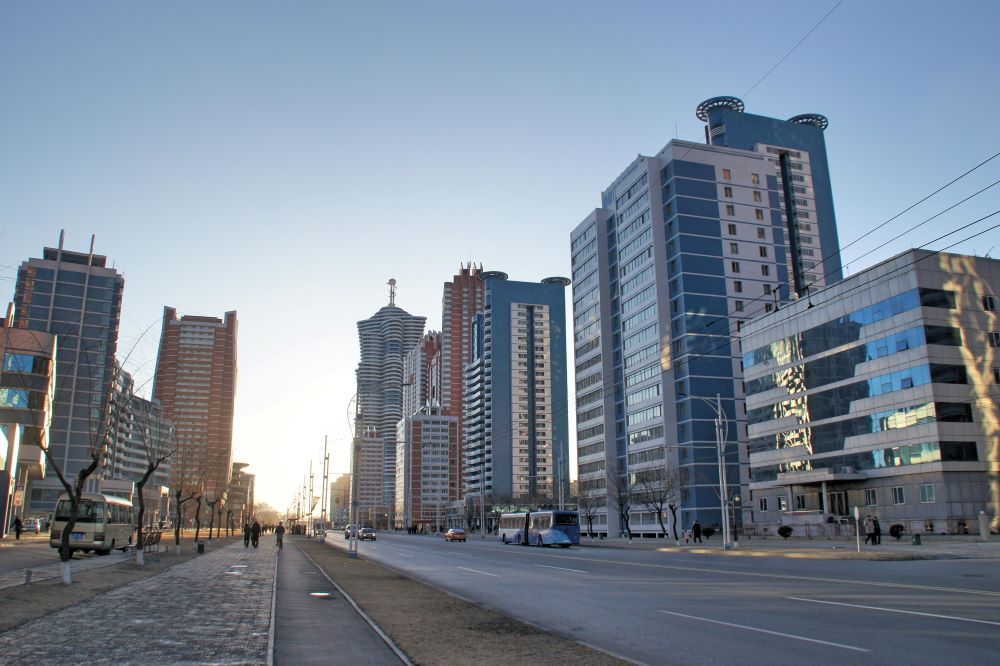 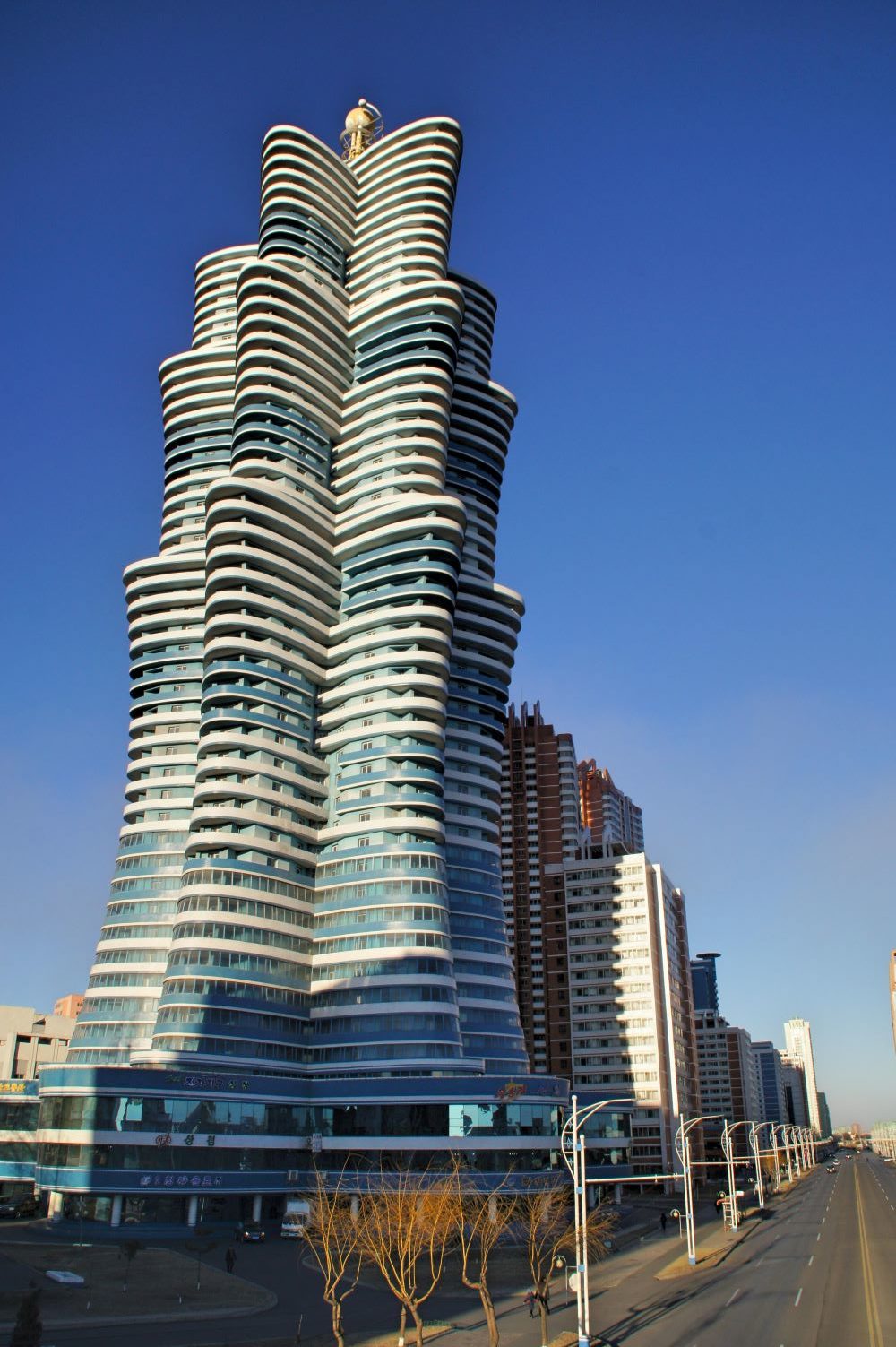 I visited North Korea last year on a five-day trip, three of which I spent in Pyongyang, the capital.

Pyongyang is not a fair representation of North Korea, which is extremely poor. It’s the showcase capital and home to the nation’s elite – individuals who are considered most loyal to the regime of its leader, Kim Jong-un.

I toured the city under the watchful gaze of two government minders who parroted the government’s position and propaganda. All foreign tourists are assigned two Korean minders who decide where tourists eat and what they see and do.

Despite most of these government minders not having left the country, they spoke impeccable English. They had a tough job.

These minders worked in pairs and were constantly watching each other. One wrong word and they and their families could be in harm’s way.

I didn’t learn much from them. The minders constantly told us their version of events, but I knew it was incorrect.

I found out more about North Korea when I was outside the country than I did in it, but being there confirmed what I already knew. It was more of a “see what we want to show you” rather than “come and learn our culture and history” kind of place.

Still, Pyongyang was directly opposed to what I thought prior to my trip. It was modern and clean, and my trip really wasn’t wasted. I saw a lot, which is the main point of traveling.

When I was there, it was the birthday of the nation’s second leader, the late Kim Jong II. His birthday is commonly referred to as the “Day of the Rising Sun” and is a national holiday.

During the holiday, there was a large exhibition in Pyongyang on a red flower called the Kimjonilia. As the name suggests, it’s his namesake flower and is often linked to him. 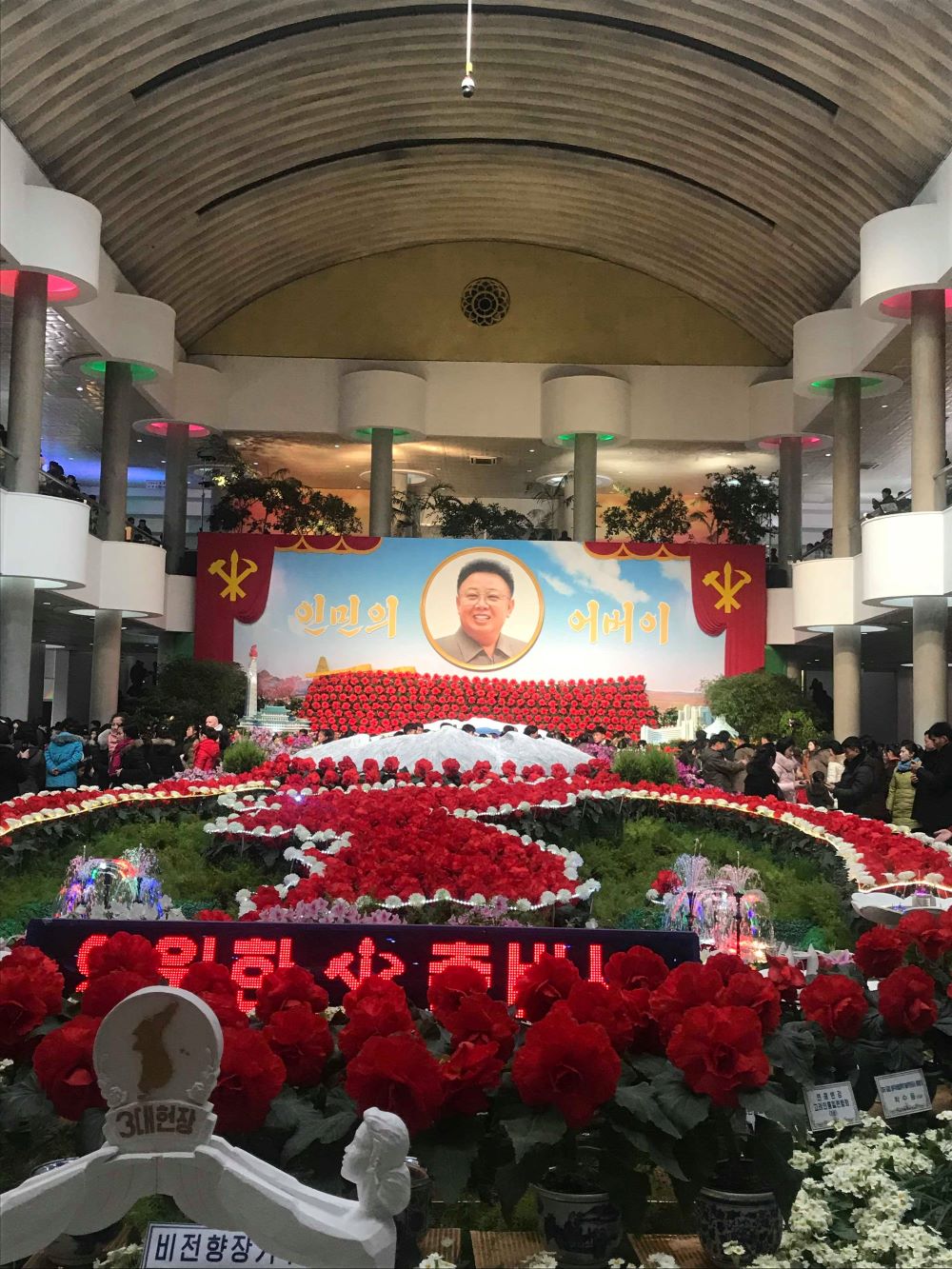 On the late Kim Jong Il’s birthday, a large exhibition on the Kimjongilia flower was held in Pyongyang. (Selvaganeshamoorthi Balakrishnan/YJI) 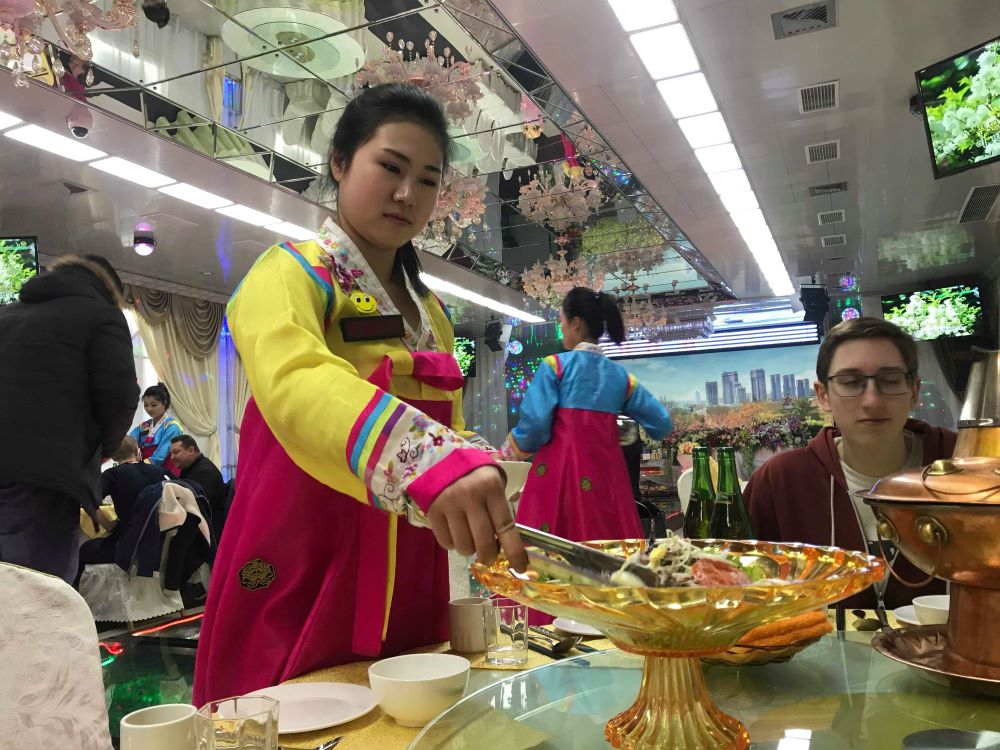 A waitress, dressed in the traditional Korean Hanbok, is preparing a traditional steamboat — a meal where meat, seafood and vegetables are cooked in a hot broth in front of patrons. (Selvaganeshamoorthi Balakrishnan/YJI) 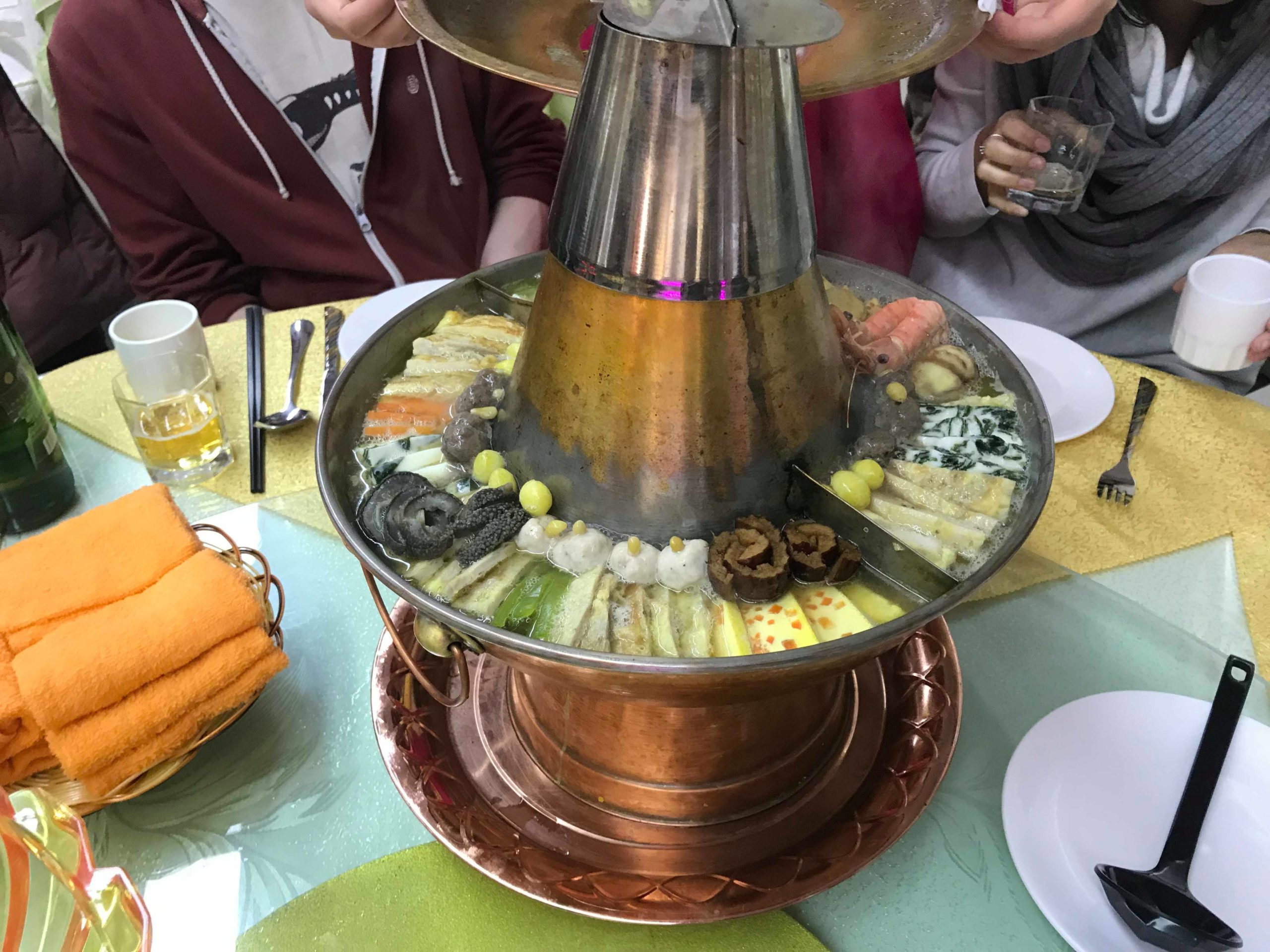 When I visited, the city was in the midst of a resurgence and a construction boom. Decaying buildings were being given a facelift and new infrastructure projects were taking hold across the city.

All important buildings, including train stations in the countryside, are adorned with pictures of the Kim family’s now-deceased national leaders,  Kim Il Sung and Kim Jong-il.

Underneath Pyongyang is the city’s metro. Comprised of two lines, it is a palatial underworld of immaculately designed stations.

Inspired by the Moscow metro, the Pyongyang metro, like the one in Russia, can also double as a bomb shelter in the event of war. 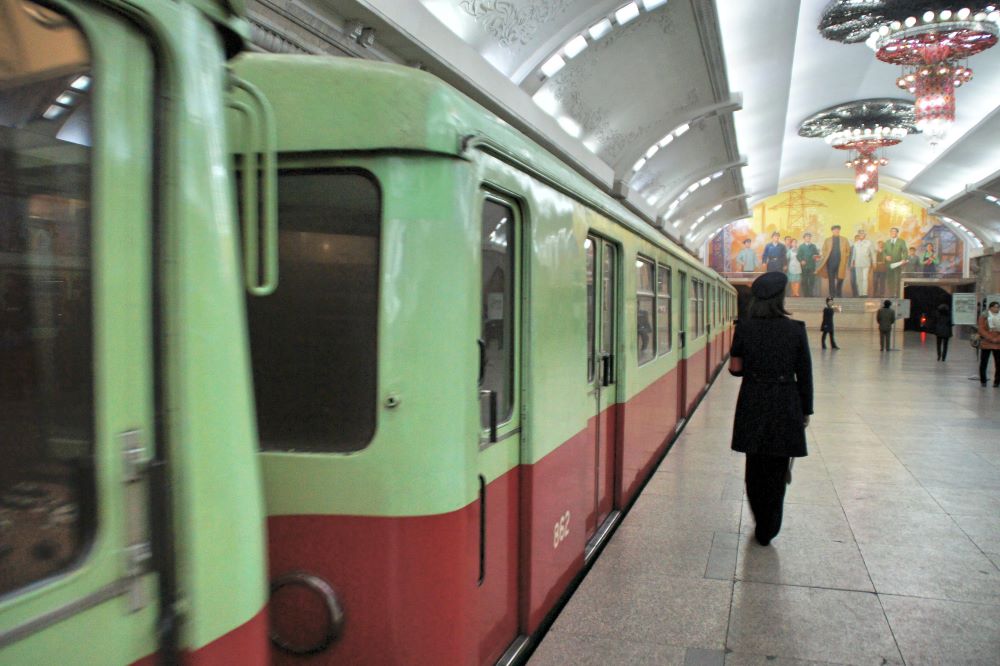 One of the many sights of Pyongyang I visited – the Mirae Scientist Street – is an ultra-modern, chic neighborhood along the banks of the Taedong River, which flows through the city.

The swankiest district in Pyongyang, it’s billed as the epitome of North Korea’s future, with the skyscraper-lined street being reminiscent of Dubai, Singapore, or some other modern-day metropolis. It contains a series of peculiarly-shaped apartment blocks that house the nation’s top scientists.

Pyongyang’s new street stalls and malls are a product of market reforms enacted by current leader Kim, who came to power in 2012. 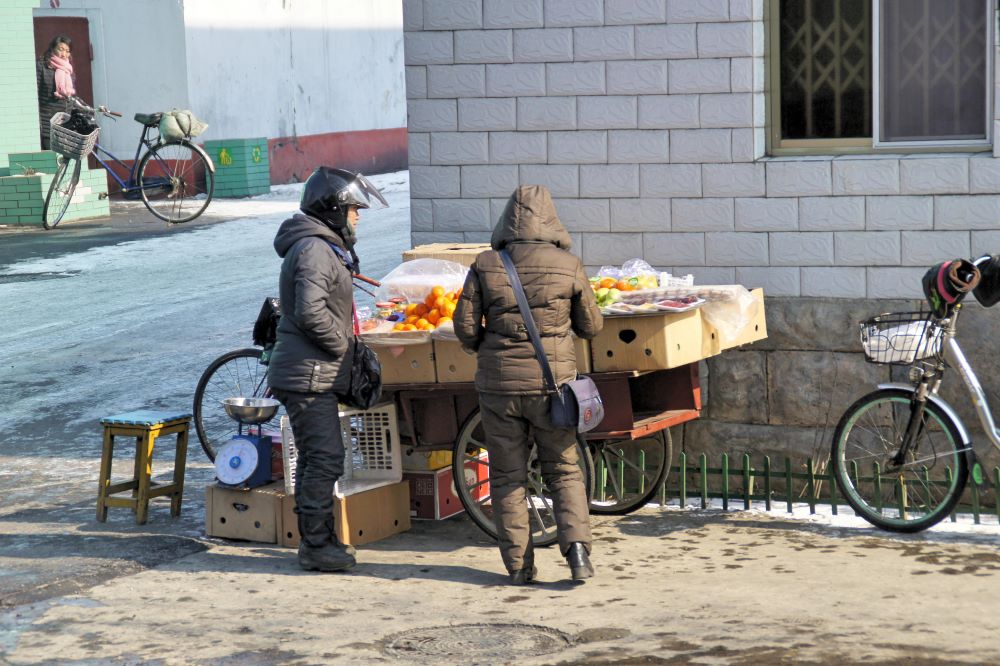 A back alley fruit stall in Pyongyang. (Selvaganeshamoorthi Balakrishnan/YJI) 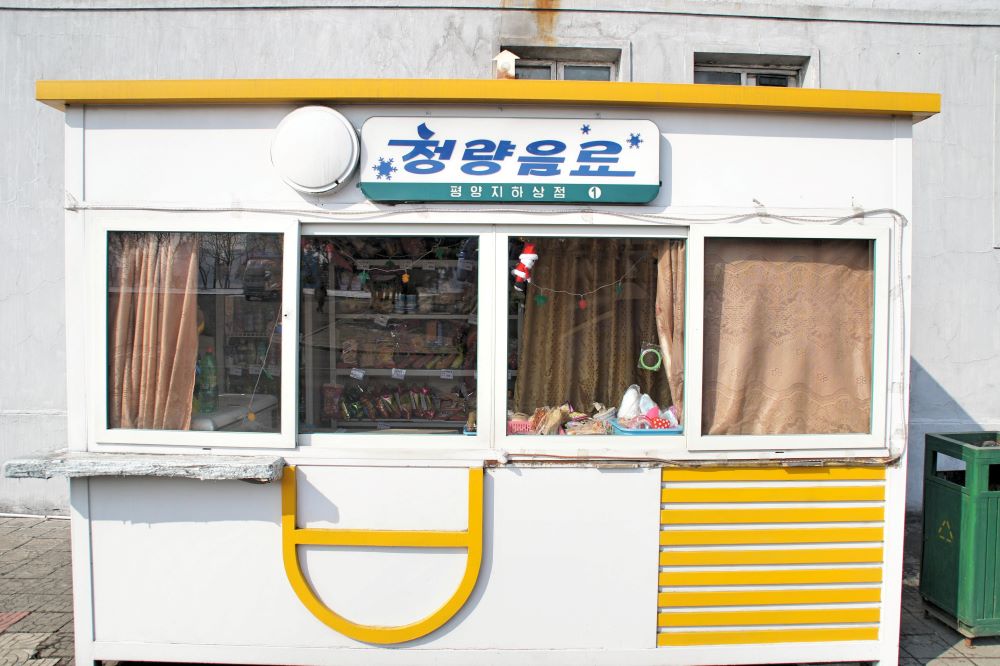 Private enterprises, once called the ‘hallmarks of an evil capitalist society,’ are springing up across the capital, but they are frowned upon, even the informal businesses.

In socialist North Korea, the state theoretically has to provide citizens with all their needs, which was clearly not possible when I was there due to the shortages of materials and food products. 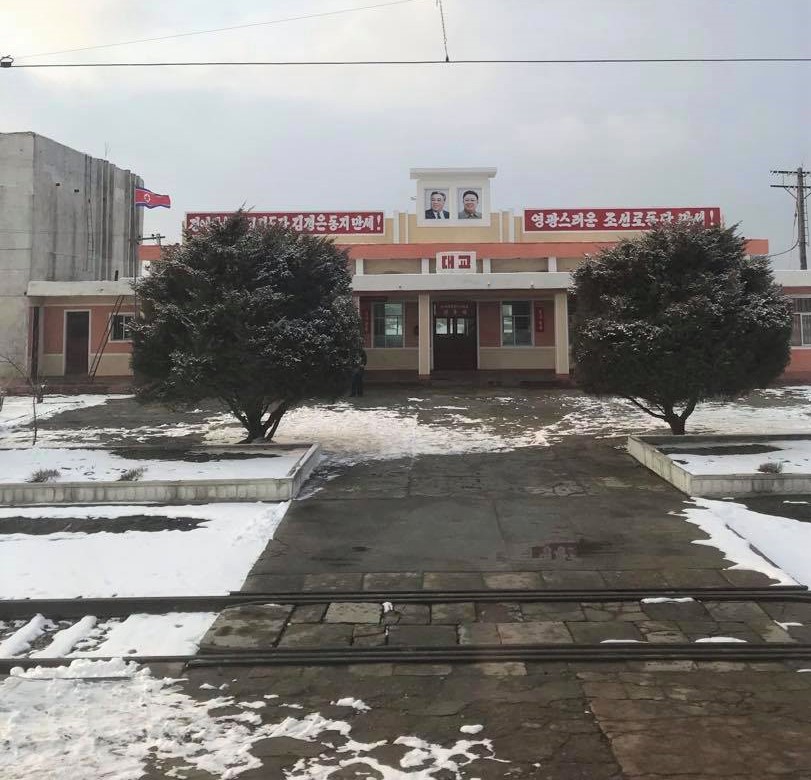 A train station in the North Korean countryside. (Selvaganeshamoorthi Balakrishnan/YJI)

Circumstances may well be worse today because of the coronavirus pandemic.

Photography of the private enterprises, however, is not allowed, the minders said, implying that the North Korean authorities aren’t especially proud of these trappings of capitalism in the capital of their socialist country.

I clearly didn’t heed their directions and took some photos anyway.

Though still drastically curtailed by international standards, there seems to be some liberalization in the daily lives of everyday Pyongyang residents.

Mobile phones are ubiquitous among the people there, though functions – including access to the internet and foreign communication – are heavily restricted.

While living standards in Pyongyang – with the constant state surveillance and restriction – still fall far shorter than most cities, Pyongyang has indeed, in its own way, made strides toward the 21st century.

Selvaganeshamoorthi Balakrishnan is a Correspondent with Youth Journalism International.