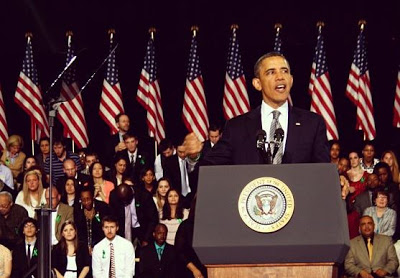 U.S. President Barack Obama addresses a crowd Monday at the University of Hartford in West Hartford, Connecticut. (Annie Coursey/YJI)
WEST HARTFORD, Connecticut, U.S.A. – President Barack Obama hasn’t had much success enacting legislation since the Republican takeover of the House of Representatives in 2011, but the frustrations of Washington wrangling have done little to weaken his strident calls for a more progressive and enlightened form of governance in America.
Visiting the state for the second time since gunman Adam Lanza massacred 20 children and six educators at Sandy Hook
elementary school in Newtown, Conn. on Dec. 14, the president continued his call for “common sense” gun violence prevention policies.
In recent months, Obama has used his office to urge universal background checks on all gun purchases, registration of
firearms, and a ban on military-grade assault weapons.
In a speech to students, faculty, and local dignitaries at the University of Hartford on Monday, Obama said the policies he’s
suggesting have the support of a strong majority of the American people, and said members of Congress should represent the views of their constituents. 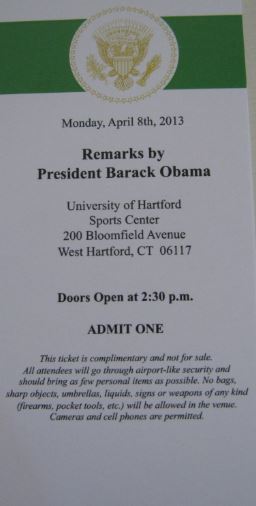 Nicole Hockley, whose six-year-old son Dylan was murdered in the school shooting, introduced the president. She said that when things like this happen, people want to act, but then they become distracted by the “details” of normal life. But now, she said, her life is no longer normal, and never will be. If people don’t want to have the same sorrow, she said, they need to act now.
Obama’s speech comes on the heels of Connecticut Gov. Dannel Malloy signing the toughest gun violence prevention legislation in the country, after the bill got bipartisan approval from state lawmakers.
The president praised Malloy and the legislature for having the courage to stand up to the gun lobby, and challenged Congress to do the same. More than 90 percent of Americans favor universal background checks, he said, and asked people to “find out” where their representatives stand on these issues.
In his February State of the Union address, Obama told Congress victims of gun violence “deserve a vote” on his proposed violence prevention initiatives.
With the Senate set to begin considering gun violence prevention legislation on the floor this week, the president asked the American people to keep the pressure on, and “stand up” to help pass sensible gun violence prevention measures.
Kiernan Majerus-Collins is a Correspondent for Youth Journalism International.