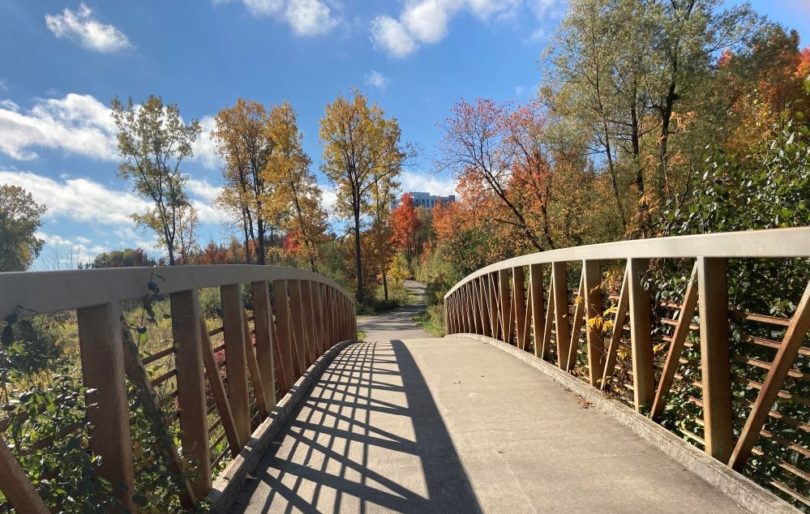 Canada is just across the northern U.S. border. (Chuying Huo/YJI)

London, Ontario, CANADA – Growing up, I was never one to be particularly invested in politics or history. The most I ever remember caring about an election was the 2016 Donald Trump vs. Hillary Clinton race for president.

At that time, I and many of my Canadian peers were thinking, “There’s no way Donald Trump will win this election!”

All I saw were the numerous celebrities promoting Clinton and memes comparing Trump’s hair to a corn stalk.

When Trump did end up winning the election, I remember being shocked but not thinking much about it. Fifth grade me didn’t fully comprehend how the U.S. election could affect my life.

But this time around as a high school student, I recognize the large influence America has on me.

Since the end of WWI, America has dominated the global economy and become one of the world’s most influential countries.

This year, I’m apprehensively following the election, hoping that Trump won’t be re-elected. As a Chinese Canadian immigrant, I have an interesting viewpoint on the election.

As much as Canada likes to think otherwise, we are too tied together not to sink with the U.S. if things get bad.

When the U.S. changes, that inevitably extends to Canada.

Juxtaposed with Canada’s consistent peaceful relations with the U.S., China’s current relationship with the U.S. is at its lowest point in decades.

With tensions high and a potential cold war in the air, I’m on edge about the future. While Trump has perpetuated appalling discrimination against immigrants, people of color, LGBTQ+ people and Asians, he has not remotely attempted to hide it.

I haven’t researched much about his opponent, former Vice President Joe Biden, but there seems to be a lot less outcry about him. As of right now, I’m rooting for Biden just because of my stronger aversion to Trump.

However, politics is messy, and history shows that initial judgments are not everything. After all, politicians are master painters in the art of deception.

Americans, our fate is in your hands. It’s time to take off those rose-tinted glasses and recognize your impact!